Every month, I talk to at least five pastors and church teams about their succession process. When I speak of succession, I’m talking about the intentional transfer of power, leadership, and authority from one primary leader to another.

This is critically important when dealing with long-term senior pastors of larger churches.

We can avoid challenges early on with early conversations.

Recently,, calls have come in from pastors who thought they had their succession process figured out but are now feeling pressured, challenged, and not so great about the future.

Here are seven stupid things I see churches doing that tend to mess up the succession process.

This is currently the biggest issue I see. A pastor and church get caught up in trying to start with finding a successor. The thinking goes, once we do that, we can proceed.

That is the wrong place to start. Succession begins with the current leader and addressing critical issues with them. If specific problems are not addressed early, they are harder to fix later.

This image tells the story 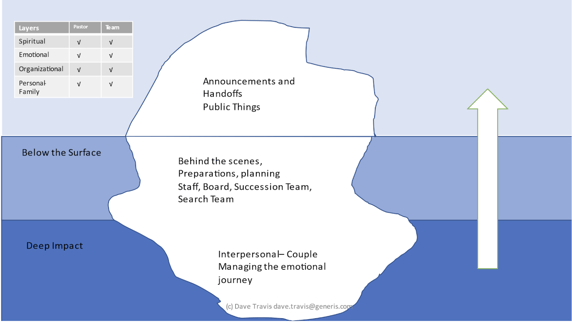 I’ve often seen on social media a photo with a long-term pastor on the platform with the new leader. These are symbolic, visual transfers of power accompanied by a quote: “This is how we do succession.”

Because pastors are performance- and people-facing, they will always envision how it looks to the congregation and how it appears to the crowd.

But that image and story are not the deep work needed to get to the desired outcomes.

The top of the iceberg is the 20% above the waterline that most people see. But most of the work is below the waterline.


There are some great stories of succession transitions out there. Some of those pastors have written outstanding accounts of their process.

But those stories and accounts rarely describe the “sausage-making” process or the challenges to be addressed.

I have spoken with church leaders who’ve been involved with most of those outstanding transition stories. Typically, there were specific strengths contextual to that situation that are rarely transferable in another context.

Learn from the others, but mimicry is a tough slog without the same tools.

4. Not Including Relevant Stakeholders

Most pastors of larger churches are good leaders. They have vision. They have led with success in the past.

But sometimes they move fast and leave out key stakeholders within the process.

The most notable miss is often an interview with the succession candidate’s spouse. Often, leaders fail to engage the staff and board properly in the process. In denominational contexts, those key decision-makers may be brought in from the home office at the end. Finally, in most contexts, we need to include some long-serving volunteer and high-impact investors in the vetting process.

You need a good process that includes the relevant stakeholders at at each of the proper phases of the process.

5. Defaulting to an Interim Pastor

I still find this way of thinking in churches across the country. There is a belief that an interim leader would best serve the church for a year or so to reset the church for the future. Some denominations actually require this.

In larger churches, I think this is the wrong approach.

Skilled interims are valuable in troubled situations, sudden resignations, or critical illnesses of a long-serving pastor. But in most cases, leadership needs to keep momentum and morale going through the transition process with a clear handoff from the long-term leader to the new leader.

About half the churches I serve will say something like: “We never envisioned really having to do this.” The documents either point to:

I often hear the opposite way of  thinking too: “We know the documents say this, but we have never really paid attention to those.”

This is a recipe for disaster and opens the church up to all sorts of legal challenges.

The solutions are found in going through the process to change the documents or finding good workarounds that conform to the stated procedure but add suitable components to the process thereby helping the church have a better outcome.

I can often help a church navigate this challenge based on my experience with 150 other large churches in this type of process.

I use this image to describe the role and limitations of the current leader as they lean into the new era if they stay in the church or in the community.

About 65% of the leaders I work with stay at the church in some capacity in the future. They are most often out of the day-to-day operations and leadership, but they still have a meaningful role.

This arrangement requires obvious guardrail statements agreed upon by the board and the next leader.

In addition, it requires individuals appointed to “call the fouls” if the guardrails get violated.

This is not the role of the next pastor or former pastor, but a group of wise counselors that can speak into the lives of leaders in ways to bring correction.

Every month, I cover issues related to senior pastor legacies in a series of webinars.
If you want to receive notices of upcoming webinars, send an email to dave.travis@generis.com with the subject “webinar.” 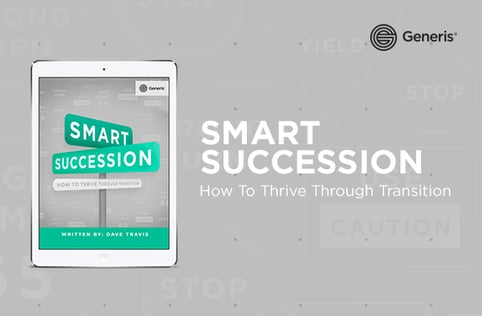